Community-based and grassroots approach to sanitation in Chennai

The Buckingham canal is one of four key water bodies in Chennai. While the Adyar, Cooum, and Kosasthalaiyar rivers cut across the city west to east, this canal runs along the north-south axis for around 40 kilometers within the Chennai Metropolitan Area. The Buckingham canal remains the most polluted water body in the city, with nearly sixty percent of untreated sewage being released into it.

While institutions, industries, and other prominent structures line the canal, its edges are largely occupied by houses and several informal settlements. These settlements are not connected to the city’s sanitation network, and thus let out their mostly untreated wastewater directly into the canal.

The ‘People’s Eco Corridor’ initiative anchored by Centre for Urbanism is facilitating the development of resilient sanitation systems along the Buckingham canal. Centre for Urbanism was set up in August 2020 in Chennai. To alleviate urban development problems in the city, it has adopted an approach that leverages practice-oriented research, evidence-based interventions, and putting people at the heart of changing urban processes. The Centre focuses on five domains – Habitat, Infrastructure, Environment, Informatics, and Governance. 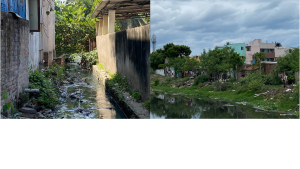 Currently, wastewater from households along the canal let their wastewater directly into it. The Centre has conceived a modular natural treatment system for wastewater management. The solution proposed by Centre for Urbanism envisions developing a decentralized micro-sanitation system, along the edge of the canal. Since space is limited, the team is proposing to the local authorities, the building of separate, smaller waste treatment plants with each one catering to two hundred households.

This initiative is also encouraging the development of a sense of community ownership over the canal, allowing locals to rightfully build connections and support its upkeep. The Centre for Urbanism team envisions the canal acting as the ‘People’s Eco-Corridor’ for the city of Chennai in the future, and not as a backyard sewer as is the case now. It also plans to scale up this model for replication across the state.